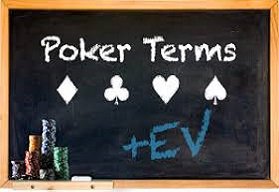 Each casino game comes with its own terminology, and for you to be considered a pro gamer, you'll need to master them. Below is a glossary of poker terms and definitions used while playing this popular card game that'll help get your lingo on. It's important to mention that besides this list, there are numerous common and uncommon poker slangs that you will stumble upon while enjoying the game.

This poker term describes a player's turn to act during a hand. If a player seems not to realize that it's their turn, the dealer will be heard saying "your action". Also, it applies to games with a lot of betting and raising.

This is a small bet all players are needed to make that feeds the pot at the start of a poker hand. These are similar to blinds, which are used in Hold'em games before a hand is dealt.

A bet that puts all of your chips into a single hand - in table stakes games, you're not allowed to wager during a hand. Usually, a side pot is created in which you can't participate as you've already run out. However, you could still win the hand in which you had invested.

This is another one of the poker terms that you'll hear a lot during your games. This refers to a hand that's considered very lucky. Essentially, it implies that the winner of the pot had the wildest of luck by catching the one card that would win the hand.

A blind is a forced bet, or a partial bet made by one or more gamblers before any cards are dealt so that a game can begin.

You've hit a "backdoor" flush when you catch both the turn and river card to make a drawing hand. For instance, having one heart on the board and a player has two hearts and catches two more on the turn and river - that's a flush.

This poker term simply describes discarding the top card from the deck, face down. It's done between each round before the next community cards are dealt. It acts as a security measure against any player identifying the card to be used in the next round.

In simple terms, it's the cost to enter a tourney or could be used to refer to the amount of money required to join a cash game a specific table. Normally, it'll be 20 times the big blind. For example, a $10 table will require you to part with $200 to have a seat at the table.

Check is also among the common poker terms that you'll come across during your gameplay. It's simply passing on a bet. If there isn't any action, then there is nothing to call. As such, if a player doesn't want to bet, they can just check. In case, there is consequent action from other players, the action goes back to the original player; here he can call, fold or raise.

Without a doubt, it's the most popular of all poker terms that's known to people who aren't even fans of poker. A dealer is the player or staff that shuffles and deals the cards in any type of casino card game.